.
Howdy, All Y'ALL! Remember me? Didja miss me? I didn't miss me because I went with me on a Reno, Nevada "Beer Run". Yup. Drove one thousand, four hundred and forty-four miles on the ultimate Beer Run.

Before I get too far into this, I wanna wish a "Happy Birthday" to all the folks out there who are celebrating a birthday today. Everyone except for Abraham Lincoln that is. I don't wish no "Happy Birthday" to murderous, Constitution-destroying White supremacists. But that's a story for another (defunct) blog, ain't it?

So, yeah, just got back from a trip to "The Biggest Little City In The World". 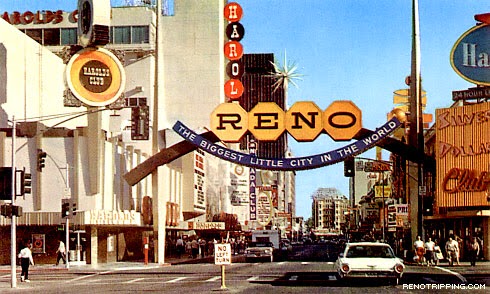 You see the Harold's Club sign on the left? That's the place Tom Waits is yakking about in the song 'VIRGINIA AVENUE' on his first album, 'Closing Time'. It's also the place where I had a little hair of the dog that bit me the night before (Seven & Seven) on the morning of my all-time worst hangover. Then Pooh and I packed our stuffs and headed up Geiger Grade for Virginia City. Unfortunately the 7 & 7 didn't stay down, and I later wrote a poem about it titled 'TRYING TO UPCHUCK YOUR LIFE ON GEIGER GRADE'. Wanna read it? Yeah, I thought not.

Anyway... so I went on this extensive Beer Run to Reno and just barely missed seeing Todd Snider in concert while I was there. I could have seen him perform at The Nugget - I called and a couple seats were still available the morning of the show - but I decided to stay in my hotel room in my shorts with a beer.

But I kept notes on my beer guzzlin', 'cause beer is serious bidnizz. (Don't worry Brother Beer Boy Bryan Bodyguard Betty, those notes are comin' to yaz soon.) I even found a new favorite beer. Yup. Lagunitas 'SUCKS' had done been dethroned. So, we're yakking about a very successful Beer Run, and I even visited Virginia City without upchucking on Geiger Grade!

At one point, I found myself on Virginia street, on the Northwest corner of the bridge over the Truckee River... 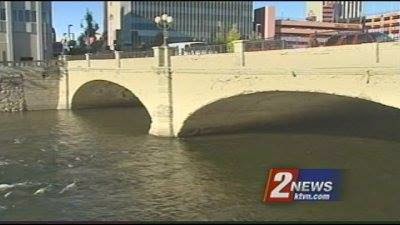 ...and I made a wish for Tiny Tim's second hit song by tossing a 1980 quarter into the Truckee River. Then I gave a buck to the long-haired 25-year-old with an acoustic guitar and an adorable 3-month old puppy, and I told him that my buck was a down-payment for him to learn the song 'Beer Run' by Todd Snider.

I yakked at the kid how Todd Snider had started out doing the same thing he was doing...

...and that the song 'Beer Run' would make him a lot of tips. (The kid actually took notes on what I was saying. Yeah, I have a rather commanding presence.)

"Let me have a Three Musketeers, and a ball point pen, and one of those combs there, a pint of Old Harper, a couple of flash light batteries and some beef jerky."
~ Toad

So, I drank a brewery's worth of beer, took notes (to be passed on to 'A Beer For The Shower Bryan' soon) and found a place to move.

But now I'm back in Hell, Airheadzona and past the time I shoulda posted my last 'Battle Of The Bands' results.

First, my thanks to all y'all who voted even though I was away and couldn't really respond to yer comments.

Here's how it toined out:

The song was 'THE SKY IS CRYING', the competitors were Stevie Ray Vaughan and Gary Moore. Counting my vote for Gary Moore, the contest ended like this...

Many years ago I purchased a copy of Gary Moore's album 'BLUES ALIVE' for my then Brother-In-Law (who also dabbled in guitar playing). When he heard Gary's version of 'The Sky Is Crying', he made some remark about it being a nice tribute to Stevie Ray Vaughan. I bit my tongue and thought: It's hardly a "tribute" when he just outplayed Stevie and made his version sound like electrified crap.

I was hoping that Stevie Ray Vaughan's reputation would keep this from being a shutout, and I think to some degree, that did indeed happen. And I appreciate that a couple of voters admitted that they came into the Battle predisposed to vote for Stevie, but their objective ears convinced them that Gary's version was better. And it damn sure WAS!

I generally like Stevie Ray Vaughan (SRV). Decades ago, when I still wasn't really greatly familiar with his recorded output, I called my favorite radio station (KLON - which broadcasted Jazz and Blues in the Los Angeles area) to find out who that was kicking guitar butt on a song they'd just played. Turned out it was SRV doing 'CROSSFIRE'. That got me started buying several of SRV's albums. The guy was great. A little bit overrated, but still great.

I believe Gary Moore's version is slightly better vocally. But since this is really mostly about the guitar, I'd say Moore beats SRV hands down. SRV's reputation aside, Moore has more exciting chops, the dynamics of his playing are superior. At the 4:17 mark, Moore brings it down and does some bone-deep soulful Blues playing, only to kick up the angry angst again at around 6:50 - WHAM!-WHAM!-WHAM! DAMN! Dudes and Dudettes, if THAT doesn't get your heart racing, you're not only dead, but you're buried and skeletal.

On the other hand, SRV had already done and said everything he was going to do with the song by about four or four and a half minutes. The rest of the 7:20 running time was simply superfluous. And I hate to admit this, but every time I've heard SRV play this version of 'The Sky Is Crying', when he goes into that long guitar stretch, my mind starts to wander: Did I pay that bill on time? Did I remember to change the watering times for the lawn? Did I have five beers or six? Well, frankly, in all the buzz, I kind of forgot myself. Does this punk feel lucky? Should I check the refrigerator to see if there's still one beer left?

If you prefer SRV's guitar tone, due to the differences in guitar makes, that's a valid argument. But then why not just listen to Danny Gatton instead? Gatton and SRV played somewhat similar guitars (a Tele and a Strat), and Gatton was known as "The World's Greatest Unknown Guitarist", "The Humbler" (because even legendary guitarists like Eric Clapton and Jeff Beck wouldn't take the stage after he had), and "The Telemaster" because he played the Telecaster better'n anyone ever did. In fact, Steve Vai, no guitar B-lister himself (he played every single note you hear by both guitarists in THIS guitar duel film clip), said:

"Danny Gatton comes closer than anyone else to being the best guitar player that ever lived."

Gatton is certainly the best I ever heard. More on Danny Gatton in a future 'Battle Of The Bands' blog bit.

Well, thanks again to ALL OF YOU who commented and voted. My next BOTB installment, in just a few days, will not be a guitar extravaganza like this one was, but it's going to feature a truly great and ultra-romantic song.

Be here or be... somewheres else.

My Love To All Y'all.
Sorry I've missed so many of your blog bits over the last week and a half, but I'm back now and keeping my evil eyes on y'all and whatchoo post.