.
STMcC’s Vote On '2019, March 1st: Battle Of The Bands' (BOTB) - Or, Bruce Springsteen Versus Mark "Twinkie" Johnson - And The Final Tally:
.
.
UHP! "What with the drinkin' an' all...", I is a day late on my Battle Of The Bands Results post. Well, it wasn't much of a "Battle", but it took place HERE. I haven't even counted up the vote tally, and there's really not much point in it. The bottom line is that Bruce "The Boss" Springsteen got fired by Mark "Twinkie" Johnson. Bruce got "BOMPED!" on the noggin. He got two votes and Twinkie got... a whole slew of 'em. I expected Twinkie to win easily but I didn't anticipate a blowout of *that* magnitude!
.
As always, I thank each of you who contributed your two-cents to the BOTB kitty. Please know that I appreciate you - your time and involvement in BOTB. The comment section was fun for me, and I even told a few 'League Of Soul Crusaders' stories from yesteryear (i.e., 1980-1985)
.
*Muchos Gracias to mi amigo, JULIO SEIS-ABEJA, for creating 'The League Of Soul Crusaders' video.
.
That picture above (circa 1982) shows me and two of the small number of females who had the courage to party with 'The League'. The blonde on the right was one of Twinkie's many girlfriends. (Yeah, despite the nickname, Twinkie was a [link> "confident heterosexual". How we wound up giving him that nickname is a story for another day. But it's pretty funny.)
.
SAMOHI (Santa Monica High School), the high school that 3 of the 6 Soul Crusaders attended (Twinkie, Nappy & myself), routinely had graduating classes of about 750 students. That's not the entire school population, but just the senior class! It was huge, because Malibu did not yet have its own high school.
.
A few voters commented on the fact that Twinkie had a really good singing voice. Indeed, he did. At SAMOHI, Twinkie was a member of 'The Madrigals':
. 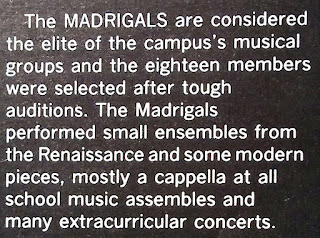 .
So, think of the competition to be selected as a 'Madrigal' in a school the size of SAMOHI, and then consider that Twinkie made the cut. Sometime in the future, I plan to use Twinkie in a couple more BOTB contests and, in my opinion, the songs I'll use show off Twinkie's voice even better'n the song 'The League Of Soul Crusaders' did!
.
While Twinkie did learn to appreciate Springsteen's stuffs (Twinkie's life probably depended upon it), his natural taste in Rock music ran more towards Journey because... singing. And I recall that some of Twinkie's favorite albums were 'Look Sharp!' by Joe Jackson, 'Candy-O' by The Cars, and 'Union Jacks' by The Babys.
.
One of my very favorite things about Twinkie's song is the guitar solo, which was performed by a friend of Twinkie's. (I wish I could remember his name.) Quite honestly, that guitar solo is one of my very favorites of all-time. It is simultaneously quirky and lyrical, and the guitarist displays a notably innate sense for how to build and release tension within a solo. And as if that weren't enough, the number of different tones he squeezes out of his guitar really impresses me!
.
I can even pick one solitary favorite note out of that entire guitar solo: Right at the 3:50 mark, he hits a single note - "BOMP!" I just love it! It seems to come out of nowhere and just stands out by itself, as if it's saying, "Listen to me!... BOMP!" And now I know who put the Bomp in the 'Bomp-Bah-Bomp-Bah-Bomp'!
.
And then at 4:09, his guitar sounds like a wounded wildcat! I LOVE it!
.
So, if you've got an extra 5 minutes, I'll ask you to listen to the song one more time. But this time, crank it "up to eleven", close your eyes, so as not to be distracted by the video images, and concentrate solely on every sound you hear coming from that guy's guitar. See if his playing impresses you the way it does me:
.
THE LEAGUE OF SOUL CRUSADERS - Mark "Twinkie" Johnson
https://www.youtube.com/watch?v=w6jFtB7plN8

.
.
.
.
.
.
.
.
.
Twinkie may have written and sung the 'League Of Soul Crusaders' song, but I wrote "the book" and the "poem":
.
ODE TO 824 BAY
.
[6/28/1982; revised in ‘84]
.
THERE IS A MYSTICAL LEGEND KNOWN THROUGHOUT THIS LAND
IT IS A SIMPLE STORY BUT, OH, SO GRAND
.
FILLED WITH EXCITEMENT, ADVENTURE AND LOVE
BUT THAT ISN’T ALL THIS STORY IS FULL OF
.
IF YOU WILL COME HERE AND SIT ON MY KNEE
I’LL TELL IT TO YOU LIKE MY FATHER TOLD ME:
.
Once upon a time . . .
.
A Feefod, A Finnin’ and a Fiddle-Dee-Dee
Went to Antonio’s with W.C.
.
Alcohol consumption and Mescal worm-eating
Hangover Trips at the B.C. Meeting
.
Nantucket, Nantucket, we drink like a dude
A fifth of gin and some dry dog food
.
Down go the chess pieces, knocked over once more
Poor Doug is passed out on the living room floor
.
It’s not right, Howard – Mumbly-Peg is a sin
Oh, goodnight sweet prince, Mark’s sick again
.
Wha’ be hadnin’? Whad ja do?
Take your chicken baby to the zoo
.
She’s got the rear end of a fifty-nine Caddy
Hick-a-boo, Hick-a-boo, yeah daddy!
.
One fag-warmer sitting on a bus stop bench
Doing something nasty with a monkey wrench
.
Ah said, “Eeebee – Deebee – Leebee
Filly Waggit’s in the chimney”
.
Uhp! Yer an idiot! A D.W. too
The Hangover Waltz is a dance you can do
.
Fatty’s gotta starve but continues to eat
Good Lord, have you seen the size of his seat?
.
And you best stay clear of Tom’s Number Five
Only a “B” or an “H” can survive
.
Idgie-Bah-Bah and Nimrod Salesmen hang out at Bay
Along with Mickie Darlin’ and the great Robert J.
.
Let’s pick up some Road Soda for to quench our thirst
And hit the “Oscar Party”, although they’re the worst
.
Drive fast, take chances, see ya at The Music Machine
One Bee-Bop, a Ree-Bop, and an Angustine
.
Throwing firecrackers at pimps is an art
Mark, Doug, and Dean laugh when they fart
.
We took our noise out to sea
To salute Catalina with a boisterous “Beee!”
.
He told another Lynth, why he wanna do that for?
You want I should hit him in the whiskers some more?
.
Yeah, tell a few jokes, slap your thigh
Join a parade on the Fourth of July
.
And you know Five-Six is pretty damn tall
What with the drinkin’ an’ all
.
So cut the poetry and hand me a brew
I’ll guzzle the beverage and scream, “Woo!-Woo!-Woo!”
.
WELL, THAT’S THE END OF THE SAGA, THE STORY IS TOLD
IT’S WORTH MORE THAN SILVER, IT’S WORTH MORE THAN GOLD
.
GENERATIONS HAVE HEARD IT AND PONDERED ITS WORDS
OTHERS, LIKE ME, SAY IT’S FOR THE BIRDS
.
I THINK IT’S A HOAX, I THINK IT’S A LIE
AND WHOEVER WROTE IT MUST HAVE BEEN HIGH!
.
In The Battle Within The Battle, The Amazing Sixwell (16-7) allowed The Magic 8-Ball (14-9) to close the gap a simdgeon. (I think he was starting to feel sorry for the 8-Ball.)
.
I'll be back here on March 15th, and I hope you will be here, too!
.
~ Stephen T. McCarthy
.
Posted by Stephen T. McCarthy at 1:23 PM