Sorry I'm late, y'all. I was sick for about a day and a half. (I've been a vegetarian for 30 years, and I think I accidentally ate some meat in a noodle dish at a buffet on Sunday. My system said, "What are you? I don't recognize you. GET OUT!" And believe me, it "got out".)

And then they screwed with my work schedule. (I'm mad and ready to quit. I won't be pushed!) So I'm way behind on my comments to everyone. I'll get there... eventually.

First of all, my gratitude to EVERYONE who took the time to listen, watch & vote on this "special" BOTB installment. I got 25 voters, and that ties my all-time record, I believe. You people are GREAT! I thank you, Thank You, THANK YOU!

I've already explained how I got the idea to make this Battle theme-based (the excesses and broken dreams of Tinseltown, the underbelly of life in Los Angeles) rather than song-based. It wasn't until I did a little research into the song 'UNDER THE BRIDGE' by the Red Hot Chili Peppers that I had the idea to make this a dual duel - requesting separate votes for Song & Video. I found the following at Wackypedia:

The members of the band respected Van Sant both as a person and an artist and were elated when he agreed to direct the video for "Under the Bridge". Flea credits the video as "the thing that really made us break through the mainstream of American and worldwide pop culture".

MTV placed the "Under the Bridge" video on heavy rotation. At the 1992 MTV Video Music Awards the Red Hot Chili Peppers led the nominations, which included the categories of "Best Video", "Best Group", and "Best Direction." "Under the Bridge" won the group "Breakthrough Video" and "Viewers Choice Best Video".

I thought to myself: "Doggone it, are you kidding? The themes are similar, but the David & David video is a godzillion times better'n the RHCP video. So, I'll make this a contest between songs AND VIDEOS." And that's how this "different" Battle was conceived.

This will surprise many: As much as I like 'Welcome To The Boomtown', I voted for the song 'UNDER THE BRIDGE' by the Red Hot Chili Peppers. It was super-close for me (my vote was like a 52%-48% decision). But any song that can get stuck in my head as quickly as 'Under The Bridge' can is a song I really dig at some mysterious level.

Note, however, that 'Boomtown' by David & David is one of my favorite Rock albums ever recorded, and I sincerely believe it's the most underrated of all time. There are 9 tracks on the album, and 3 or 4 of them I like even better'n the hit 'Welcome To The Boomtown'. That gives you a clearer understanding of how much the 'Boomtown' LP appealed to me, and still does. 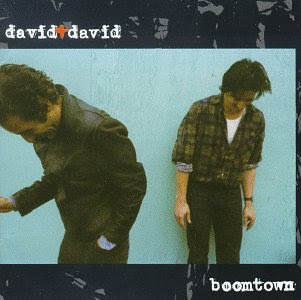 If you follow this blog on a regular basis, you will encounter David & David here again, when I resume posting blog bits about 'THE SOUNDTRACK OF MY LIFE'.

I was astounded by the voting outcome. I was sure that David & David would clobber da crap outta the Chili Peppers in the Video category, and they did... and then some. But since 'Under The Bridge' went to #2 on the Billboard music chart, as compared to 'Welcome To The Boomtown' at #37, I figured that the Chili Peppers' hit would edge out David & David's hit in the Song category. But, you know, the only thing one can really know about 'Battle Of The Bands' is: You never know.

I feel the Video vote is a total no-brainer, and it seems so did most of all y'all. 'Welcome To The Boomtown' is superior in 101 ways, and one of those ways is how some images were synchronized with the song's recurring percussion "BANG!" That cleverness ALONE makes the David & David video better'n its competitor in this Battle.

Here's the video for a repeat performance. Watch for that synchronized image / sound device:
0:32 - Person dives into swimming pool.
2:04 - The gunshot.
2:32 - The boxer's left jab.
3:03 - David Baerwald and the drunken man high-fiving.
3:23 - The wrecking ball striking the abandoned building.

Once again, I thank EVERY SINGLE ONE OF YOU for participating, and I hope to see you here again for my spooktacular Halloween BOTB installment on October 15th.


And now, a special message to YOU from my friend Kevin (and me)...

WHAT ARE YOUR TOP 25 FAVORITE MOVIES EVER MADE?

I was hoping that YOU would participate in a fun survey a friend and I have done a couple of times in the past (1994 and 2004) with people all over the USA. The survey is NOT going to be published or distributed to the general public, but if you want a final copy we can send you one when it is finished in late 2015 or early 2016.

My friend Stephen T. McCarthy and I are asking folks to come up with their Top 25 Favorite Films of all time. Not what you believe to be the 25 greatest, but what films are your all time favorites?

It is really fun to participate in, read the final results and see what films were popular in the final tally. I would also encourage you to get as many friends and family to join in as possible. The more, the merrier!


What you need to include:


STATE
FILM TITLE & YEAR
When listing the film, make sure to include the year of the film, so if the movie you have chosen is a remake we will list the RIGHT version. A great place to verify film years is the Internet Movie Database:

IMDb - Movies, TV and Celebrities
Also, the year included will help us determine WHICH movie in a series the person means, when they get lazy and write "Alien" instead of "Aliens", or get lazy and don't add a number, like, I, II, III, IV.


Top 25 lists should be in TWO PARTS: The Top Ten, and The Next Fifteen. You don't need to order them as #1, #2, #3, etc. You can alphabetize them if you want (that's helpful), or you can just list them in any random order, so long as we can tell the Top Ten from The Next Fifteen (because 'Top 10' movies will receive 3 points, while 'The Next Fifteen' movies - in your Top 25 list - will receive 2 points).
And, according to our old rules, a person can list singly a movie from a series, or they can take the ENTIRE SERIES and list it in one spot. But they CAN'T pick and choose installments and then try to lump them all into one slot. Examples:


I really hope YOU will participate in this fun survey. Take your time thinking about it. No rush, but I would say a good due date to have this completed would be October 31, 2015. Again, feel free to pass this along to anyone else you know who enjoys watching movies. We have had people participate from east to west, even outside the USA, in the past. Husbands, wives, sons and daughters can ALL participate. We look forward to your response!