Republican Vs. Democrat, Male Vs. Female, War Vs. Peace, Light Vs. Dark, Good Vs. Evil, Man Vs. Machine, Love Vs. Hate, Dog Vs. Cat, Sun Vs. Moon, Brain Vs. Brawn, Oscar Vs. Grammy, Angel Vs. Demon, Laurel Vs. Hardy, Beer Vs. Wine, TV Vs. Radio, Pitcher Vs. Batter, Paper Vs. Plastic, Reality Vs. Fantasy, Yeshua Vs. Beelzebub, Conservative Vs. Liberal, You Vs. Me, House Vs. Senate, Offense Vs. Defense, Kramer Vs. Kramer, Spy Vs. Spy, Fischer Vs. Spassky, W.C. Fields Vs. Sobriety, Harold Gimpy, Jr. Vs. Sheldon J. Pismire, Rock Vs. Paper Vs. Scissors, Islam Vs. Everything, Singer Vs. Singer, Band Vs. Band... 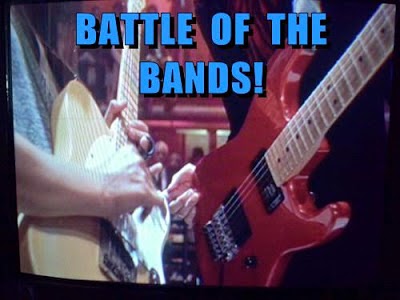 Today's “Battle” song is a slow, beautiful ballad - the standard

'I CAN DREAM, CAN'T I?' And below is what Wackypedia has to say about it:

"I Can Dream, Can't I?" is a popular song written by Sammy Fain with lyrics by Irving Kahal. The song was published in 1938, included in a flop musical, 'Right This Way'. Tommy Dorsey released a hit recording of it the same year, but it was in the postwar years that the song gained its greatest success.

The best-known version was recorded by The Andrews Sisters and Gordon Jenkins' Orchestra on July 15, 1949, and released by Decca Records … It first reached the Billboard charts on September 16, 1949, reaching number one on all three of the magazine's main pop charts at the time (Best Sellers in Stores, Most Played by Jockeys, and Most Played in Jukeboxes).

So, obviously we are going to start with the famous Andrews Sisters version.

Next up is the 1975 version by Karen Carpenter. It was arranged by Billy May and Richard Carpenter.

My Spidey-Sense told me this wasn't going to be much of a competition (possibly a total wipe-out), so I decided to go looking for a good third optional alternate. What I found was the Jerry Vale version. I'd certainly heard of Jerry Vale, although I don't know if I'd ever heard him. Well, this guy could damn-sure sing, that's for damn sure! So if you would like to hear the song performed by a male voice, you can click the URL link provided below and give Jerry a shot. The Andrews Sisters, Karen Carpenter, and Jerry Vale - all are available for your voting pleasure. [Nope! Looks like Jerry Vale's version has already been deleted by YouTube. Guess it's between The Andrews Sisters and Karen Carpenter only.]


'I Can Dream, Can't I?' - Jerry Vale
https://www.youtube.com/watch?v=PdBhsJaKIh8


.
Alright now, “you know the gig”... I welcome EVERYONE to vote for their favorite of these songs in the comment section below. And feel free to tell us WHY you chose one song over the other. (NOTE: Comment Moderation is activated. All submitted comments that do not transgress "Ye Olde Comment Policy" will be posted as soon as possible. Thanks for taking the time to comment.)

YE OLDE COMMENT POLICY: All comments, pro and con, are welcome. However, ad hominem attacks and disrespectful epithets will not be tolerated (read: "posted"). After all, this isn’t Amazon.com, so I don’t have to put up with that kind of bovine excrement.
Posted by Stephen T. McCarthy at 6:54 AM 38 comments:

.
Republican Vs. Democrat, Male Vs. Female, War Vs. Peace, Light Vs. Dark, Good Vs. Evil, Man Vs. Machine, Love Vs. Hate, Dog Vs. Cat, Sun Vs. Moon, Brain Vs. Brawn, Oscar Vs. Grammy, Angel Vs. Demon, Laurel Vs. Hardy, Beer Vs. Wine, TV Vs. Radio, Pitcher Vs. Batter, Paper Vs. Plastic, Reality Vs. Fantasy, Yeshua Vs. Beelzebub, Conservative Vs. Liberal, You Vs. Me, House Vs. Senate, Offense Vs. Defense, Kramer Vs. Kramer, Spy Vs. Spy, Fischer Vs. Spassky, W.C. Fields Vs. Sobriety, Harold Gimpy, Jr. Vs. Sheldon J. Pismire, Rock Vs. Paper Vs. Scissors, Islam Vs. Everything, Singer Vs. Singer, Band Vs. Band...
.
THE BATTLE OF THE BANDS! (‘BOTB’) 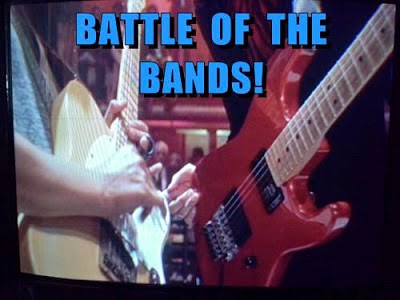 .
.
Alright, let’s get on it...
.
On March 3, 1985, a new television series debuted. It was a private detective show like none before it and none that came after. 'MOONLIGHTING' introduced Bruce Willis to TV audiences as it followed the exploits and tracked the sexual tension of former 'Blue Moon Shampoo' model Maddie Hayes (Cybill Shepherd) and smart-assed, wisecracking Los Angeles private detective David Addison (Willis). The show was incredibly clever, creative, and innovative; it frequently mixed fantasy with realism, broke “the fourth wall”, and had the show's characters directly address the TV viewers. Car chases? Fuhgeddaboudit! Those were so 1970s! The pilot episode had the first ever elevator chase (filmed at the Bonaventure Hotel in downtown L.A.) and a later episode included a wheelchair chase in a hospital. This was definitely not your grandpa's detective show.
.
Some of the episode titles in just the first two seasons alone hint at the the off-the-charts creativity of 'MOONLIGHTING': “Gunfight At The So-So Corral”; “Read The Mind – See The Movie”; “Brother, Can You Spare A Blonde?”; “The Dream Sequence Always Rings Twice”; “Atlas Belched”; “Twas The Episode Before Christmas”; “Every Daughter's Father Is A Virgin”; “Sleep Talkin' Guy”.
.
My Ma got hooked on 'MOONLIGHTING' immediately and sometime during the first season she urged me to watch an episode of it with her; she was sure I'd like it even though I've never been much of a television junkie.
.
So, finally, one night I watched a one-hour episode with her. Me: “Eh. It was OK.” Ma convinced me to watch it again the next week. Me: “OK. Not bad. But I don't get your fascination with it.” I watched a third episode. Me: “We gotta wait a whole week before the next episode? Damn it!” Yeah, once I figured out the dynamic of Maddie and David's relationship and got into the groove of how they delivered their lines, all the banter and the recurring inside jokes, I was hooked like Richard Pryor on crack cocaine! I now consider 'MOONLIGHTING' to be my fourth favorite TV series of all time.
.
The show's popularity began to wane as it ran over-budget and failed to complete filming on schedule, resulting in no new episodes when there should have been, and forcing the secondary characters to carry entire episodes from time to time. The really fatal flaw, however, was when the writers mangled the story and wrecked the sexual tension between Maddie and David. There were still some great episodes (and a “bad” 'MOONLIGHTING' episode is still better than the best episodes of most other TV shows), but the end was near.
.
A lot of 'MOONLIGHTING' fans hated the final episode, but I think it was the perfect ending to the show. Sad as hell, but a perfect finale that included so many of the classic gags the show became famous for. In fact, I think it may have been the best final episode of ANY TV series ever!
.
I was on vacation in Kentucky with my parents when that last episode aired on May 14, 1989. I remember watching it on a motel television set and my Ma weeping at the end. Only the official “Man Card” in my wallet prevented me from crying right alongside her. (The “Anselmo Case” - a long-running inside joke on the show – was never solved, we were informed at the very end. Ha!)
.
Why have I told you all this, and what does it have to do with 'Battle Of The Bands'? The last few minutes of the last 'MOONLIGHTING' episode featured the Jazz standard 'WE'LL BE TOGETHER AGAIN', which only made those last few minutes seem even sadder because we 'Moonlighting' fans knew that... they wouldn't.
.
Frank Sinatra recorded the song in 1956 with backing by the Nelson Riddle Orchestra. It was one of the last songs I played for my Ma in her hospice room the day before she passed away. The song is on a CD she gave me for Christmas in 2003.
.

'WE'LL BE TOGETHER AGAIN' – FRANK SINATRA
.

.
https://www.youtube.com/watch?v=Cht_8zpSSfA
.
.
The version of the song used at the end of the final 'MOONLIGHTING' episode was recorded in 1961 by Ray Charles and Betty Carter. Here it is:


https://www.youtube.com/watch?v=y0ia-NEWPlk
.
'MOONLIGHTING' was the best of Bruce Willis and Cybill Shepherd – I loved them together. It's like 'THE THIN MAN' series with Myrna Loy and William Powell... two people with the right chemistry which made both of them better together than either one was on their own. If you're interested, below is the Charles/Carter version of 'WE'LL BE TOGETHER AGAIN' as it was incorporated into the last 3 minutes of the last 'Moonlighting' episode:
.

Voice Your Vote @ 'MIKE'S RAMBLINGS' by clicking HERE.
.
As I've done in the past, I will continue to return to my 'BOTB' blog bits on the 7th and 21st of each month to post my own votes and announce the winners in the comment sections.
.
~ Stephen T. McCarthy
.
YE OLDE COMMENT POLICY: All comments, pro and con, are welcome. However, ad hominem attacks and disrespectful epithets will not be tolerated (read: "posted"). After all, this isn’t Amazon.com, so I don’t have to put up with that kind of bovine excrement.
Posted by Stephen T. McCarthy at 6:56 AM 57 comments: