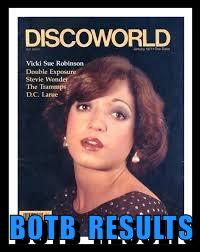 .
STMcC’s Vote On '2020, June 1st: Battle Of The Bands' (BOTB) - Or, Starbuck Versus Vicki Sue Robinson Versus The Tavares Brothers - And The Final Tally:
.
First and foremost, my sincere thanks to everyone of you who voted on my Battle [link> HERE.
.
When I made the decision to treat Starbuck like a red-headed stepchild by removing their big hit 'Moonlight Feels Right' from this 3-way BOTB competition, I pretty well figured it meant that I was giving the victory to Vicki.
.
And that's exactly how it played out:
.
Starbuck = 3 votes
.
Vicki Sue Robinson = 9 votes
.
The Tavares Brothers = 4 votes
.
Because I done Starbuck wrong, for fear of facing a BOTB shutout, I feels bad. And to rectify the situation, I'm seriously thinking that on June 1, 2021 (if the Internet and BOTB is still a "thing"), I may give Starbuck a rematch against Vicki and see if she can still wallop Starbuck on an even playing field. (My Magic 8-Ball sez: Outlook not so good.)
.
I had a lot of fun in the comment section. (Thanks again all Y'all!) And I got a kick out of it when G Dogg referred to Starbuck's 'Rock 'N' Roll Rocket' as "The Plan 9 From Outer Space of Songs!"
.
Ha!-Ha! That still makes me COL! (Chuckle-Out-Loud!)
.
And now for the rest of the story...
.
As much as I love Vicki Sue Robinson's 'Turn The Beat Around' (and, yes, I really do LOVE it!), my vote went to Starbuck because... there's just so much history there for me.
.
I told y'all (here) how I happened to see Starbuck play their final song of the night ('Rock 'N' Roll Rocket') at Disneyland during "Grad Nite '77". The very next day I drove to a record store and bought ALL of Starbuck's LPs. ...(They only had two albums out at that time.) Over the next two or three years, I played those albums to death - damn-near wore the grooves smooth.
.
If you listen to [link> ROCK 'N' ROLL ROCKET' / LITTLE BIRD (Reprise) once more, you'll notice that in the segue to 'Little Bird (Reprise)' there's this weird Framptonesque "Talk Box" segment in which Starbuck's singer, Bruce Blackman, asks the question "Is it fun to be serious? Ha!-Ha!-Ha!-Ha!-Ha!"
.
Believe it or not, hearing that so many times over the next few years, it actually had a pretty huge impact on me. As some of you even mentioned in the BOTB comment section, my senior portrait showed a very intense and serious 17-year-old. Indeed, that was me.
.
But within a few years of that picture having been taken, I had lightened up to a tremendous degree and had actually developed a pretty quick 'n' sharp sense o' humor. And although there are certainly plenty of reasons for the change - or more well-rounded development - I have always given credit first to Bruce Blackman for asking me a godzillion and two times, "Stephen, Is it fun to be serious? Ha!-Ha!-Ha!-Ha!-Ha!"
.
Thanks, Bruce! You done helped me come outta my shell quite a bit!!
.
Well, that's all for this one. But I hope all Y'all will join me again for my next Battle Of The Bands installment on July 1st.
.
~ Stephen T. McCarthy
.
Posted by Stephen T. McCarthy at 9:28 PM 12 comments:

.
BATTLE OF THE BANDS (BOTB)
.
.
Shoop-Shooby -
Shooby-Duh-Dooby-Doop-Dooby-Dooby-Doo-Wah -
Buh-Doo-Wah!
.
Yes, it's time once again for Battle Of The Bands (BOTB).
.
Alright, let's get on it. Let's get ON this thing!...
.
As I sit here about to compose my next BOTB installment, I am experiencing an Xtremely Bittersweet feeling. I know for a fact that as long as I live on Earth in this D-FensDogG body, "the good times are over" ...as perfectly xpressed in the song [link> 'The Good Times Are Coming' by Mama Cass.
.
On June 17, 1977 - 43 years ago this month - I graduated from Santa Monica High School. And that same night, my graduating class - along with many other graduating classes from the Southern California area - celebrated 'Grad Nite' at Disneyland.
. 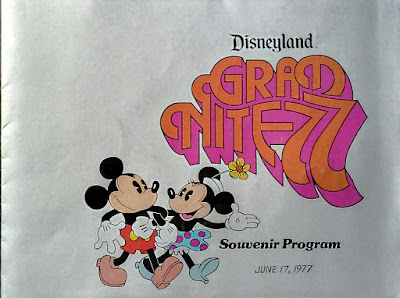 .
That night, the 3 headlining bands at "The Happiest Place On Earth" (or, "The House The Mouse Built") were Starbuck, Vicki Sue Robinson, and The Tavares Brothers. When this BOTB idea first occurred to me several months ago, my initial thought was to put each artist's highest charting song against each other in a 3-Way BOTB and see who triumphed.
. 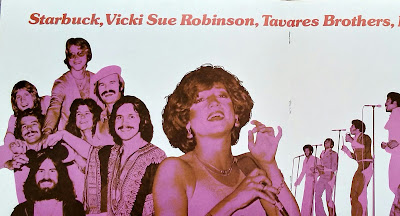 .
But pretty quickly it dawned on me that Starbuck's biggest hit - [link> 'Moonlight Feels Right' (#3 in 1976) - was so hugely popular that it would probably blow out, if not shut out, the competition. (Is there anybody who dislikes that song?!!) So, in an effort to try to keep this Battle a bit more competitive, I selected a different song to represent Starbuck.
.
I was actually standing in line for the Matterhorn ride when I heard 'Moonlight Feels Right' wafting through the air. I turned to my friend and said, "Wow! That sounds exactly like the real version from the radio! I wonder if it's the real band."
. 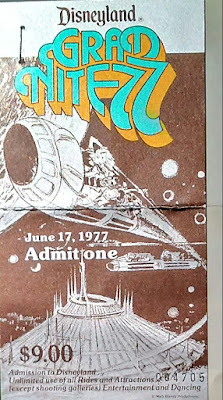 .
After we got off the Matterhorn ride, my friend and I went straight to the bandstand where we luckily happened to catch Starbuck's finale for the night - 'Rock 'N' Roll Rocket' - which was not only the title track of their second and latest album, but it was also the first time I ever saw two drummers drumming on full drum kits on a stage at the same time.
.
Since 'Rock 'N' Roll Rocket / 'Little Bird (Reprise)' were not radio hits, I'm using them in this Battle in the hope it will make this more of a... well... a "battle".
.
ROCK 'N' ROLL ROCKET' / LITTLE BIRD (Reprise) - Starbuck
https://www.youtube.com/watch?v=3UQvRmOeyNk

.
.
I was a big "Disco Sucks!" guy in the 1970s. There were only a scant few Disco songs that I actually liked (like). But I will tell you upfront and without the slightest bit of shame that my #1 all-time favorite Disco song - which I love so much that I even own it on a compact disc today - is 'Turn The Beat Around' by Vicki Sue Robinson (#10 in 1976). Man! That song makes me get on down with my bad self and move my groove thang! (I have no idea what a "groove thang" is, but if it's attached to my body, it's MOVIN' when I hear this song!!) I love everything about 'Turn The Beat Around'. Everything! And I always did. Crank it up to 11 - show no shame!!
.
TURN THE BEAT AROUND - Vicki Sue Robinson
https://www.youtube.com/watch?v=eybDOisOOLg

.
And for the Soulful folks in the crowd, we have The Tavares Brothers' hit 'It Only Takes A Minute' (#10 in 1975). You gotta admit, the 1970s radio programming was "diversified", and that was without any government edict to enforce it! Bring back KHJ, KMET and WKRP in Cincinnati!!! (*We love you, Mary Ann in Cincinnati!*)
.
IT ONLY TAKES A MINUTE - Tavares Brothers
https://www.youtube.com/watch?v=BxtPbCYk-38