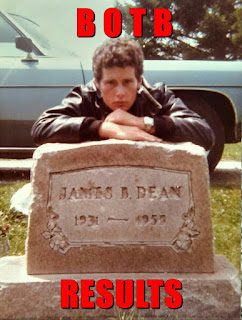 Part 2 of my 3-Part James Dean 'Battle Of The Bands' series took place HERE, and it was one heckuva blowout!

The songs battling it out were 'JAMES DEAN' (The Eagles) and 'JACK & DIANE' (John 'Cougar' Mellencamp). The turnout was good and the conversation was fun, as usual. What wasn't so good was the competition: Yes, I was pretty sure that 'Jack & Diane' would beat 'James Dean' - after all, it *WAS* two against one - but I didn't expect that level of a beat-down. 'Jack & Diane' had 5 votes recorded before The Eagles even got on the scoreboard! And The Eagles fortunes didn't improve much after that, either. It isn't often that The Eagles are dogs - I mean, "underdogs". Well, they were this time, and they got BIT!

My vote? Yeah, I went along with the majority. It's rare that I can be counted amongst the majority, rather than being a loud voice in the minority, but it happens once in a Chartreuse Moon.

Why the Cougar rather than the Eagle? Well, I simply like the song better and find it more interesting, even though 'Jack & Diane' merely mentions James Dean while 'James Dean' is ABOUT... well, James Dean. Aside from the neat 'Rebel Without A Cause' reference in the line "Well, then, there, Diane", I can really relate to the lyric "Life goes on, long after the thrill of living is gone". That line didn't particularly resonate with me back in 1982, when this song was a radio hit, but today I consider it one of the most profound observations ever sung in a song!

Not that I'm complaining about my life, mind you. But I'm tired, and "there is nothing new under the sun".

There is a season (turn, turn, turn)

And a time to every purpose, under Heaven

A time to be born, a time to die

A time to plant, a time to reap

A time to kill, a time to heal

A time to laugh, a time to weep

And unfortunately, I've reached the stage in my life where everything I do is something I've previously done. It may be fun, but it's been dun.

There is a time to be young, energetic and full of life;

and a time to be bored and ready to go Home (capital H).

However, below is a picture of me in my bedroom (circa 1983), when life was still wild and full of spirit (and spirits!) One of my drinking buddies, Cranium, has passed out on my floor, a can of Colt .45 malt liquor is just beyond his reach. My gesture for the camera seems to say, "You see what I have to put up with?" Right over my shoulder, you can see a red-jacketed 'Rebel Without A Cause' James Dean cardboard stand-up next to my bookcase. 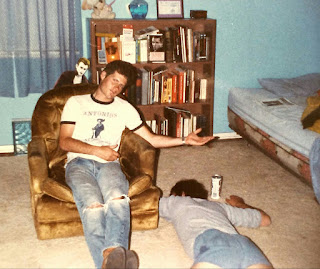 By 1988, the acting dream had burned out, or faded away. Truth be told, I had really begun to find my own true self, and the idea of pretending to be other characters didn't really thrill me. I guess "the thrill was gone", and I was now focusing more on writing. ("Writing is your forte, STMcC", my Pa told me a thousand and 3.5 times. Coincidentally, my Pa had actually been enrolled in the same California elementary school as James Dean. Although Pa didn't recall Dean, we did the math and it's a fact that they were in the same school at the same time.)

I still believed that James Dean was the most naturally gifted actor of all time, and in October of '88, some of my fellow Dean fans and good friends whom I had met at the 1980 James Dean festival in Fairmount, Indiana, came out to Los Angeles where I escorted them to some of the important Dean-related sites in the area: 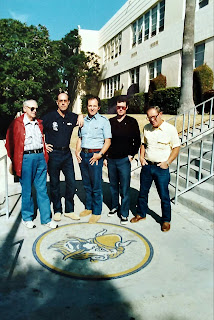 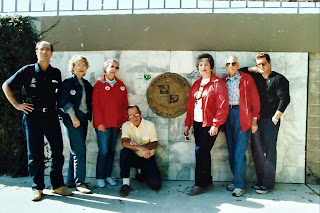 Those were some pretty big names in the world of James Dean Fandom in '88. Bob Pulley was one of Dean's friends and classmates in high school and he was the last surviving pall bearer from James Dean's funeral.

The pictures were taken at Santa Monica High School, which is the school I attended and graduated from, and which also played the role of "Dawson High School" in the movie 'Rebel Without A Cause'. In that first photo, we're gathered around the very spot where Jim Stark (James Dean) accidentally stepped on the school seal on his first day at Dawson High and caught hell for doing so. Even in 1974-1977, when I went to "SAMOHI", there was an unwritten rule that you weren't supposed to step on the school seal. 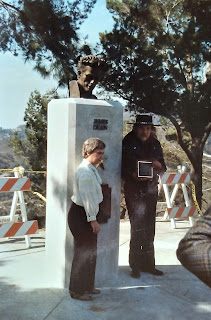 The photo above, also from October of 1988, was taken when Kenneth Kendall's bust of James Dean was first unveiled at the Griffith Observatory in L.A. That was Sylvia Bongiovanni, president of the We Remember Dean International Fan Club, posing with the artist.

Once again, I thank EACH AND EVERY ONE OF YOU who took the time to visit my blog, listen to the songs & cast a vote.

On November 1st, the Super Bowl of my 'James Dean BOTB' series will appear here. Part 3 will be the finale, where the winner from Round 1, 'ROCK ON' by David Essex, will go up against the winner of Round 2, John 'Cougar' Mellencamp's 'JACK & DIANE'. I hope all y'all will return to help determine the ultimate winner. I'll be yakking a bit and showing pictures of my years on M*A*S*H in Part 3. See ya then (I hope)!