BOTB RESULTS: MARGARITA DAY, 2022 (Or, THE CHAMPS VERSUS JIMMY BUFFETT) 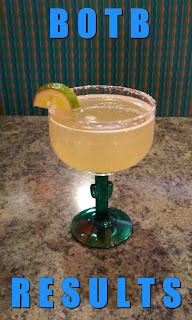 I created this Battle Of The Bands installment (HERE) believing that 'Margaritaville' by Jimmy Buffett would probably beat The Champs' 'Tequila' by a fairly comfortable margin. And although I really dig BOTH songs, I also came into this Margarita Day (Jan. 1, 2022) Battle thinking I would be voting for 'Margaritaville' - no question.

But then, listening again, closely, to 'Tequila' by The Champs, my own vote suddenly seemed less certain. Mang, I LOVE that raunchy saxophone! I seriously had to reconsider my BOTB bote a couple of different times but I finally did decide to stick with my first impression, voting for Jimmy Buffett's hit. 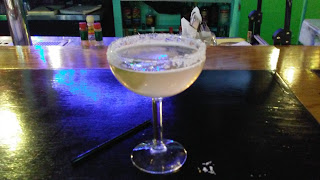 See, here's the thing: although I'm a rebel's rebel, and therefore I haven't a single tattoo on my body, this verse really tickles me:

I stayed here all season

Nothin' to show but this brand new tattoo

But it's a real beauty

How it got here I haven't a clue

Also, there was a kind of Lost Weekend on Catalina Island, circa 1982. In my book manuscript about The League Of Soul Crusaders, the story was told in chapter 16, 'Twenty-Six Miles Across The Sea'. Nappy, my friend Dean, and I took the boat to Catalina. The weekend started with a fifth of Bacardi 151, and it ended with us drinking daiquiris until our money ran out. We had only enough money to get the van out of the parking lot in San Pedro when we got back to the mainland. And in between the rum and the daiquiris, there was one wild story after another (like sleeping on park benches, sleeping on a mountain top, and running from the cops).

The rest of that day we spent lying under palm trees on the knoll near an outdoor bar and we had the waitress bring us a steady flow of daiquiris. A stranger and his wife passed by and he stopped when he saw us. "You know, I haven't seen you guys without a drink in your hands for three days", he said. This was the first time we had noticed the gentleman but apparently we had made our presence known on Santa Catalina Island. 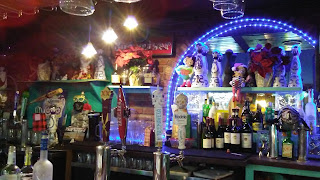 Although rum & daiquiris were the alcoholic theme of that trip, because of the laid-back island atmosphere, any time I hear Jimmy Buffett's 'Margaritaville', I am immediately nostalgically transported back to Catalina and that wild, wild weekend. So... as much as I dig 'Tequila' by The Champs, it's 'Margaritaville' for me. 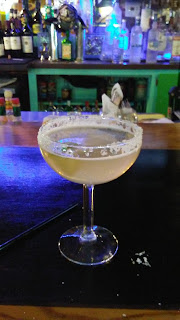 My genuine thanks to each and every one of you who came by here with two cents for the BOTB kitty. Also, my sincere wishes for a healthy & happy 2022! Hopefully you will all return for my next Battle Of The Bands contest on February 1st. Until then, may you...