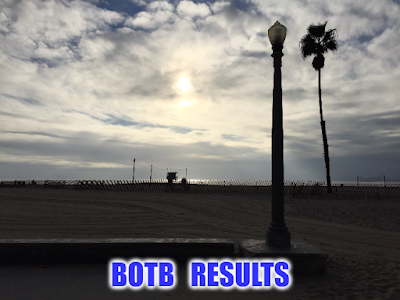 Hokey-Smoke & Hoo-Wee! (as Rocket J. Squirrel & Deputy Dog Dawg would say). This turned out to be a better Battle Of The Bands installment than I thought it would be. The contest took place HERE and it featured two different songs titled 'DO IT AGAIN'.

I had a really nice voter turnout this time, so I thank every one of you who made this Battle possible. And Special Thanks to my two "Anonymous" voters who generously dropped their two cents into the BOTB Kitty. (Don't worry - "Special Thanks" is nothing like "Special Sauce"). I hope you'll both return again next time, on October 1st. And bring a name, if you feel comfortable coming out of the Film Noir shadows.

Because The Dan's 'Do It Again' was a bigger hit than was The Beach Boys' 'Do It Again', I half-expected them to win handily here. But it was a very interesting Battle: The Boys came charging out the chute, garnering the first two votes. Then The Dan slapped 'em around for awhile, but The Boys came charging back, landing a flurry of punches just before the final bell rang.

I really dig BOTH songs a lot, but my vote went to The Boys, because from those first few funky notes, that unique rhythm has me bopping in my chair. Plus, I can really relate to the lyrics of The Boys' song, whereas The Dan song is so lyrically unrelatable (which is true of almost all their great tunes) that it just doesn't quite bury itself into my heart & mind.

As I said to my old drinking pal, Pooh: "girls... the beach... suntanned bodies... waves of sunshine... warm and out-of-sight nighttimes... surfing and dancing... and a beautiful coastline". Or, "sorrow... stolen water... getting dragged by the feet... a cheating girlfriend... Vegas slot machines, roulette wheels, and cards that are black". Hmmm?

Anyway, two great songs slugged it out and here's how the judges' combined scorecards added up:

Wow! An ideal BOTB outcome (1-vote point spread between winner and loser). I loved it!

Thanks again, All Y'All! I hope to see y'all back here again on Oct. 1st.

Stephen T. McCarthy
STEPHEN = The first person known to have been martyred because of their personal testimony of Jesus Christ (Acts 6-7). My foremost allegiance is to my Holy King, Jesus, who has been given all authority in Heaven and on Earth, and to His God who bestowed it upon Him (Matt. 28:18; John 20:17). ----- T. = Thoreau, as in Henry David Thoreau, the writer and staunch abolitionist whose classic 1849 essay Civil Disobedience includes this: "I cannot for an instant recognize that political organization as my government which is the slave's government also." I abhor slavery and injustice in all of their forms! ----- McCARTHY = The Wisconsin Senator, Joseph McCarthy, one of America's greatest heroes and the MOST unjustly vilified individual in our country's history! His efforts to expose Communist infiltration of our government transformed this embattled man's name into a pejorative catchword: McCarthyism. If you still believe that Joseph McCarthy was the most evil American of the Twentieth Century, educate yourself today. Go to... https://www.thenewamerican.com/culture/history/item/15223-the-real-mccarthy-record ...and see how you've been misled.