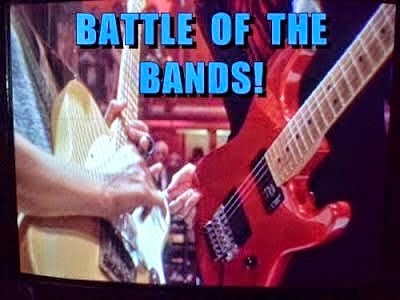 .
Shoop-Shooby –
Shooby-duh-Dooby-Doop-Dooby-Dooby-Doo-Wah –
Buh-Doo-Wah!
.
Yes, it’s time once again for ‘Battle Of The Bands’ (‘BOTB’)
.
Alright, let’s get on it...
.
.
TRIVIA Q:
Can you name a person who co-wrote a song and scored a 'Billboard' Top Ten hit with it and then a decade later joined a different band, re-recorded the same song and scored a 'Billboard' Top Twenty hit with it?

The answer is: "guitarist JAMES COBB".

I was thinking that I should use a spooky song on BOTB since we are so close to Halloween. And my second thought was: Why not use the song 'Spooky'?

"Spooky" was originally an instrumental song performed by saxophonist Mike Sharpe, ... which first charted in 1967 hitting #57 on the US pop chart. Its best-known version was created by The Classics IV when guitarist James Cobb and producer Buddy Buie added lyrics centering on a "spooky little girl". In 1968, the vocal version of the song reached #3 in the U.S. (Billboard Hot 100) and #46 in the UK.

Cobb (along with bandmates Robert Nix and Dean Daughtry) later became part of the Atlanta Rhythm Section and re-recorded "Spooky" in 1979. ARS's version hit #17 in the US and #48 in the UK. "Spooky" has also been covered by a number of artists including Dusty Springfield, whose gender-flipped version was featured prominently in the Guy Ritchie film 'Lock, Stock And Two Smoking Barrels'.

I never saw that movie (although I'm certain I would hate it!) but I do dig the Dusty version. First, let's hear Cobb's second hit version of the song:

.
I find that there's a peculiar but very appealing quality to Dusty Springfield's voice that I can't quite 'splain. It is extremely obvious to my ears (maybe one of y'all can put it into appropriate words?) but I'm unable to express it in written language.

With [Dusty Springfield's] distinctive sensual sound, she was an important blue-eyed soul singer and at her peak was one of the most successful British female performers, with six top 20 singles on the United States Billboard Hot 100 and sixteen on the United Kingdom Singles Chart from 1963 to 1989. She is a member of both the U.S. Rock And Roll and  U.K. Music Halls of Fame.

In Dusty's version, the rhythm is the same but... Toto, I've a feeling we're not in Atlanta anymore. It includes a brief but cool alto sax solo and I think it's damned good and different enough from the "second" original hit version that it will make this a neck-'n'-neck contest.

[Methinks I know who StratPlayer-Chris b votin' fo'.]