.
'TRUTH AND SHADOWS' is a blog I've been following for a couple years now. They do some damned good, in-depth analysis of controversial events such as 9/11, the Boston Marathon Bombing, and the Sandy Hook school "shooting".

The other day, they posted an article with the sad title 'Dave McGowan Battling Aggressive Cancer: Wrote 9/11 Was A Lie On 9/12'. Some of you who used to follow my 'Ferret-Faced Fascist Friends' blog might recognize that name.

Back when I posted my 2-part series 'They Can Put A Man On The Moon But They Can't... Put A Man On The Moon' (probably my best blog bit title ever), I mentioned and linked to Dave McGowan's great (and sarcastically funny!) article 'WAGGING THE MOONDOGGIE'. Unfortunately, barring a miracle, Mr. McGowan likely won't be with us much longer. He will be missed by many.

In honor of his research and sarcastic sense o' humor, I wanted to post a little sumpin' here at my new blog about N.A.S.A. ("Never A Straight Answer") and the "Moon Walks".

The fluidity of Buck Dharma's guitar playing on the track, 'Moon Crazy', is almost Danny Gatton-esque and it's a good example of why I've often referred to him as "the most underrated guitarist of the Classic Rock era". Buck Dharma didn't just play the guitar, he painted with it! You could call his work "Soundscapes".

The 'Truth And Shadows' blog bit (see link in second paragraph) quoted from McGowan's 'Wagging The Moondoggie' article and I am going to paste some of that below in red.

Although Uncle Sam (or "Uncle Scam" as I like to call it) engaged in earlier and more disastrous scams prior to the fake Moon landings and Moon walks, I tend to think of the Moon bullcrap as the "granddaddy" of U.S. Government hoaxes.

The 1913 Federal Reserve Act scam was the biggest and most universally detrimental "crime" of Uncle Scam. We, as a nation, will literally NEVER recover from that one.

But I think the one that scares people the most (and even made some of my longtime readers nervous when I addressed it at 'F-FFF') is the fake Apollo Moon landing program. Why? Because once a person researches THAT and becomes suspicious (less than one hour's worth of time needed), then follows up with a little more detailed OBJECTIVE study and concludes that we never really put any men on the Moon and returned them to Earth (about an additional one or two hours of time necessary) and that the U.S. Government lied about it then and continues to lie about it today, that person will then come to the frightening realization that there is nuttin' Uncle Scam wouldn't do and lie about if it served his purposes.

The more astute and spiritually-minded objective researchers will also be ultimately led to the fact that the U.S. Government is in bed with, and doing the work of, "the father of lies". (Google it if you're not familiar with the term.)

I think we need another song here to lighten the mood:

OK, this next song is from 1977's criminally forgotten 'Night After Night' - one of my favorite live albums.

'MOON TEARS' - NILS LOFGREN
(from the album 'Night After Night')

There was much about the Apollo flights that was truly miraculous, but arguably the greatest technological achievement was the design of the lunar modules. Has anyone, by the way, ever really taken a good look at one of those contraptions? I mean a detailed, up-close look? I’m guessing that the vast majority of people have not, but luckily we can quickly remedy that situation because I happen to have some really good, high-resolution images that come directly from the good people at NASA.

While what is depicted in the images may initially appear, to the untrained eye, to be some kind of mock-up that someone cobbled together in their backyard to make fun of NASA, I can assure you that it is actually an extremely high-tech manned spacecraft capable of landing on the surface of the Moon. And incredibly enough, it was also capable of blasting off from the Moon and flying 69 miles back up into lunar orbit! Though not immediately apparent, it is actually a two-stage craft, the lower half (the part that looks like a tubular aluminum framework covered with Mylar and old Christmas wrapping paper) being the descent stage, and the upper half (the part that looks as though it was cobbled together from old air conditioning ductwork and is primarily held together, as can be seen in the close-up, with zippers and gold tape) being the ascent stage.

The upper half, of course, is the more sophisticated portion, being capable of lifting off and flying with enough power to break free of the Moon’s gravity and reach lunar orbit. It also, of course, possessed sophisticated enough navigational capabilities for it to locate, literally out in the middle of fucking nowhere, the command module that it had to dock with in order to get the astronauts safely back to Earth. It also had to catch that command module, which was orbiting the Moon at a leisurely 4,000 miles per hour.

But we’ll get to all that a little later. I think we can all agree for now that such a sleek, stylish, well-designed craft would have no problem flying with that kind of power, precision and stability.” 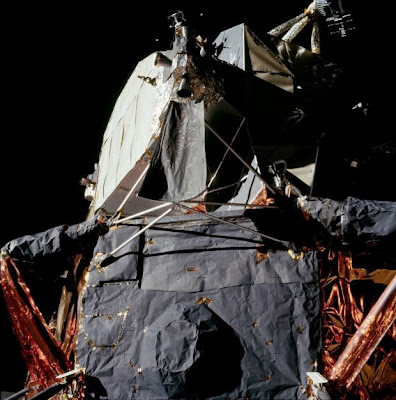 Yes, this is a real lunar module – courtesy of NASA.

Another related website I like can be found here: http://www.aulis.com/nasa4.htm. And that's where I got the following photos: 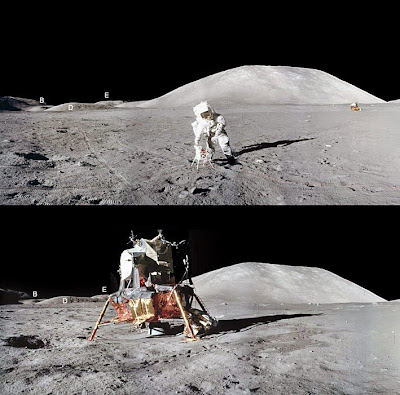 The astronaut got to that spot before the Lunar Module did? 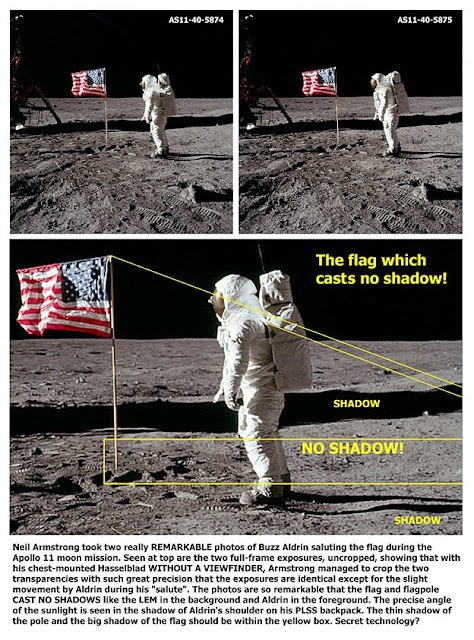 Truth has been eclipsed by United States Government lies:

'ECLIPSE' - PINK FLOYD
(from the album 'Dark Side Of The Moon')

"There is no dark side of the Moon, really.
Matter of fact, it's all dark."

Best wishes to Dave McGowan for a full recovery.