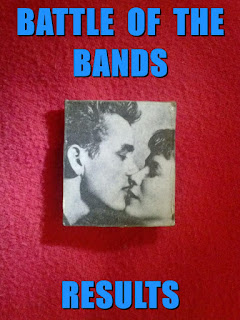 Hokey-Smoke & Hoo-Wee! I sure dropped the ball on this 'Battle Of The Bands' Results page, didn't I? It's a full three days late! {*Hangs head with great shame... unlike some shameless punks... who shall *STILL* remain shameless *AND* nameless.*} I dropped an easy fly ball in right field which allowed three SanCramcisco Giants runners to score and tie the game. Looks like I picked the wrong week to trade Duke Snider, Wally Moon, and Willie "Three-Dog" Davis! (And this is the LAST time I'll play right field!!)

My first in the 'BOTB James Dean' series took place [link> HERE and it turned out to be fantastic!!

The first four votes all went to David Essex and his big hit 'ROCK ON'. At that point, I pretty much threw in the towel on Don McLean's 'AMERICAN PIE'.

But then a phunny thing happened on the way to the finish line: Don started collecting votes like baseball cards and the next thing I knew, the Battle was over and it was tied 6 to 6.

That means MY vote is going to determine the winner of this first James Dean BOTB installment. (I LOVE this kind of ending!!!)

Well, first I want to say that I love BOTH of these songs. Yes, 'American Pie' got played to death (like 'Black Water', 'Hotel California', and 'Stairway To Hellven'), but it's a truly great song, which is one reason it got played to death. So, with NO lack of respect toward McLean's 'American Pie', I cast my winning vote for 'ROCK ON' by David Essex.

'ROCK ON' will now meet the winner of Round 2 of 'BOTB James Dean', which will appear here on this blog on October 1st. So please turn out to vote then like you did now.

'ROCK ON' -- I will elaborate a bit more on my thoughts about this song in a later 'BOTB James Dean' installment, but for now I just want to say that one of the things I find so appealing about this song is that it is amazingly original in sound. Off the top of my head, I can't think of ANY other song, before or since, that resembles 'ROCK ON'. I would describe it as a super-duper-slowed-down James Brown 'FUNK' song with big-bumping bass, and orchestral strings added for sweetening. Plus, there's those percussion touches to emphasize the underlying "punch!" It may be slow, but it's serious! (Don't underestimate this Bad Boy!)

What *other* song can match that description? None that I've ever heard. And that's just for starters. Later, I will say a bit more about why I love 'ROCK ON' like I do.

I very, Very, VERY sincerely appreciate each and every one of you who voted in this contest. (And the comment section "badinage" was fun, as always.)

It doesn't get any better'n that, as far as I'm aware of.

James Dean died in an automobile accident on September 30, 1955. In 1980, my Ma showed me a brief newspaper mention that in Dean's hometown of Fairmount, Indiana, they were planning a 25-year celebration of his life that September. I decided to attend this event. I was 21 years old at the time. I flew from Los Angeles to Indianapolis, rented a car and then a motel room in Marion, and attended the James Dean festivities in Fairmount. I was completely alone and didn't know a soul in Indiana. But like any good Method actor would, I purchased some overalls to get into the James Dean farm boy mood.

At this point, I should probably mention that, due to many odd coincidences - even before I went to Indiana - I thought there was a real possibility that I was James Dean reincarnated. And although I never really think about it anymore, I still believe it's a possibility. As a [Maverick] Christian today, I don't care one way or the other, but... "it could be true".

At James Dean's high school, where they were having a ceremony, Dean's old high school Drama teacher, who had never seen or heard of me before, walked up to me and asked if I would hand out flyers to people who showed up. So, I did, like any good student would. (It was in handing out flyers at James Dean's high school that I met Inga and her sister who had driven down from Wisconsin to attend the celebration. As a result, Inga and I had a kind of... sort of long-distance "thing"... and she later flew to L.A. to meet me there.)

I met a great old guy named Russ Hodson from Indianapolis, and we immediately clicked. And through him, I met Carole Redus from Alabama. They were both long-time James Dean fans and (unbeknownst to me) "insiders".

I'd read in a newspaper that Martin Sheen was going to attend the celebration. So, when Russ asked me if I wanted to go with him and Carole "to pick up Martin at the airport in Indianapolis", I said I would. On the way to the airport, I discovered that "Martin" was NOT Martin Sheen but Martin Noakes, who was flying in from England.

But it turned out great, because I really liked this "Martin". (Sadly, Russ passed on many years ago, but I'm still in contact with Carole and Martin.) Russ & Carole & Martin had so many connections that I found myself invited to go to the farmhouse where James Dean was raised, to meet Ortense Winslow, the Aunt who raised him when his mother died. I got to go into Dean's childhood bedroom, see his black leather jacket, see his childhood artwork hanging on the walls of his bedroom, tap his bongo drums, and see his handprint in the farm's barn. Yeah, things like that happen all the time, by coincidence, when you're all alone in a state where you know no one and have never been before: 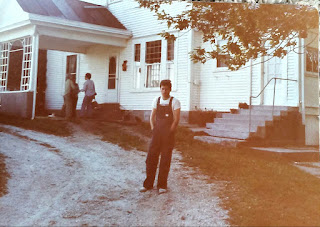 [Me, in 1980, at the farmhouse where James Dean was raised. Carole Redus saying Goodbye to Dean's Aunt in the background.] 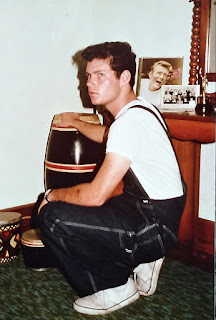 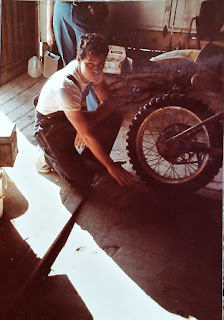 [Me, in 1980, in the barn where James Dean's hand print is still remembered by very old cement.]

Having been born and raised in Los Angeles, the small town country atmosphere of Fairmount, Indiana, made quite an impression on me, and shortly after returning to L.A., I wrote a poem about it:

In soft, willowy grass you can lie down

At a sun-spotted place under a tree

Listening only to the breeze as it dances over you

In a little park resting from activity

Walking past the grandest of houses

Containing people who are real

Barefoot in the small and quiet streets

Of a town with great appeal

Until the horizon has taken you in

These lazy days of sun bring to mind

'The Adventures Of Huckleberry Finn'

You can stop to watch the birds

And the squirrels that abound

Or catch a glimpse of painted leaves

As they spiral toward the ground

And of all the peaceful things to keep you occupied

These are just a few

There ain't nothin' that you have to do 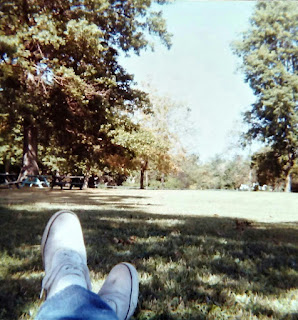 [My shoes, in 1980, "at a sun-spotted place under a tree, in a little park resting from activity", in September at Fairmount.]

I intend to be back with another 'BOTB James Dean' installment on October 1st. We'll do a Round 2 in this contest, and I will tell some more stories about Dean 'n' me. I thank All Y'all again for participating in this Round 1.