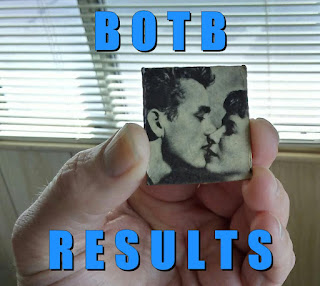 Well, I waited as long as I possibly could. I now MUST post the BOTB Results.

The third and final part of my 'James Dean BOTB Contest' took place [link> HERE. It was between 'ROCK ON' (David Essex) and 'JACK & DIANE' (John 'Cougar' Mellencamp), and it wound up being a huge disappointment.

The last thing I wanted was a tie. Imagine watching a full season of the NFL or MLB and at the end, the Super Bowl or World Series was declared a tie!

Nevertheless, I appreciate every one of you who took the time to visit, comment, and cast a bote. Thanks, all y'all!

(I'm listening to some [link> Tiny Tim while writing this, just to make me feel a wee bit o' better about this mess. Tiny Tim always puts a smile on my face! And later, I'm gonna get drunk and watch 'Pinocchio'... and that ain't no lie!)

David Essex jumped out to an immediate 5-1 lead but... the lead didn't last.

As much as I really dig 'Jack & Diane', my vote went to 'ROCK ON' by David Essex. There is just so much I love about that song. First of all, it's REAL Cool! I mean, it's just plain cool. It would be cool even if it didn't mention James Dean, the king of Cool. And as I previously described it, 'Rock On' sounds like a super-duper-slowed-down James Brown 'FUNK' song. But wait! There's more!...

Aside from the repeated mention of James Dean (my acting hero), in the lyrics of 'Rock On' there's also a mention of 'Summertime Blues'. That song was by Eddie Cochran who has always been my favorite Rock artist from the 1950s. I love Eddie and still listen to him regularly. After a thorough, many-years-long study of it, I came to the conclusion that Eddie Cochran's 'Sumertime Blues' was the very first Punk Rock song (or more accurately, the very first Proto-Punk Rock song). 'Summertime Blues' was the first truly anti-establishment song I've ever found -- it was anti-parents, anti-boss, and anti-government (but with a sense o' humor, which I'll always have).

References to James Dean and Eddie Cochran in the same song! OF COURSE I voted for THAT! Hullo-oooo!

Although I did own a red leather James Dean-inspired motorcycle-type jacket when I was in my early twenties (as seen in the M*A*S*H photos I displayed), that wasn't really my favorite leather jacket. In fact, I eventually gave the red leather jacket to my buddy Kelly "Andy" Anderson (who committed suicide in 1986), because my more basic black leather jacket was my favorite and the one I practically lived in for a decade or more.

Here's me wearing that black leather jacket (sans a pin) at the Statue of Liberty in 1983: 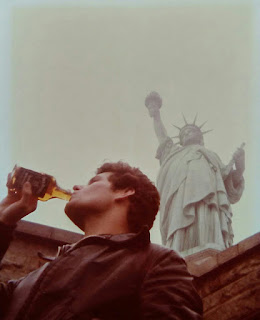 At different times, I wore a single pin on that black leather jacket, and there were only 3 pins that I ever deemed worthy enough of being displayed on that leather jacket:

1) The first one was a black & white Eddie Cochran pin.

2) Later, I replaced the Eddie Cochran pin with a Lone Wolf pin.

3) And lastly, I replaced the Lone Wolf pin with a black & white James Dean & Julie Harris pin. This pin was handmade for me by my acting buddy, Marty "Party" Brumer. I think Marty cut the picture out from a Fox Venice Theatre or Nuart Theatre flyer advertising their showing of 'East Of Eden'. I LOVED that pin -- it was literally one-of-a-kind -- and I still own it to this very day. Marty Brumer was killed by a car thief in 1989, but the James Dean pin he made for me remains one of my all-time most cherished possessions. 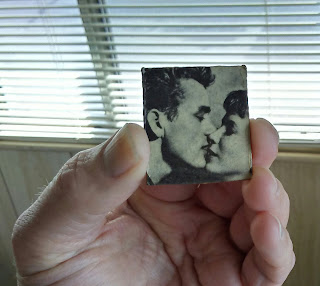 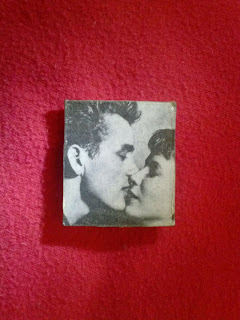 Here's me wearing that almost-famous black leather jacket (WITH my handmade, one-of-a-kind James Dean pin) in downtown Los Angeles, circa 1985: 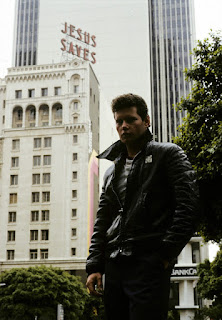 In the previous post, I showed y'all pictures of me on MASH during my "Dog Tag Years". I'll close this disaster with a few mo' pics of me on a few mo' shows: 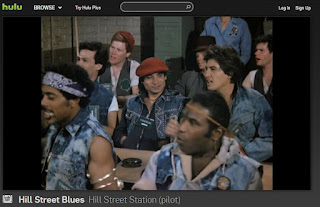 [Me, at far-far right ("in the vest, is it?"), as a member of The Shamrocks, the idiotic Irish gang on the ridiculous show 'Hill Street Blues'.] 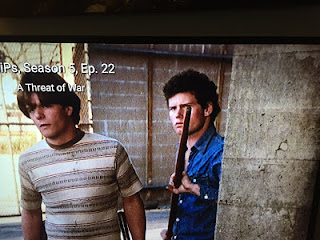 [Me, at right, playing the part of a martial arts gang member on the idiotic show 'CHiPs'.] 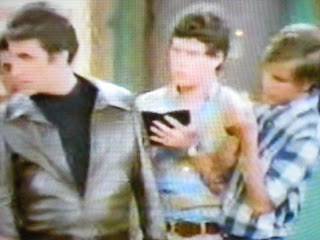 [Me, at center, taking notes while Fonzie tells us guys how to pick-up-girls on the moronic, shark-jumping show 'Happy Days'. The image quality is very poor, but that's apropos, because the show was incredibly low-quality, too!]

Well, thanks again to ALL O' YOUZ for showing up and attempting to promote a winner in my 'James Dean BOTB Contest'. Sadly, there was no winner. What we had was a tie -- which is like kissing your sister, or so I've been told (by my Brother... the sick bastard! ;-)

Anyway, I intend to return here on December 1st for a traditional Christmas BOTB installment. I hope to see you here again for that. Until then...